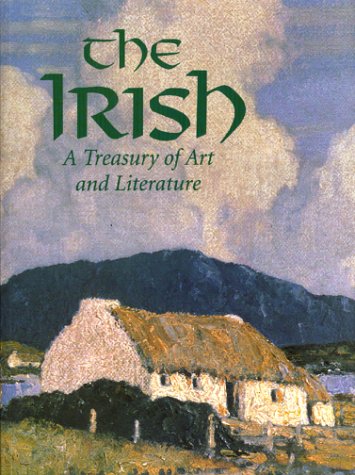 The glorious legacy of Irish art and literature has survived centuries of foreign invasion, famine, and civil war to offer a rich portrait of a proud and complex country and her people. Beginning with the ancient Celtic sagas preserved for centuries in an oral tradition, to the recording of these pagan epics and the Christian gospels by early Christian scribes in some of the most magnificent illuminated manuscripts of all time, the legacy continues down to the Dublin of James Joyce and the Belfast of Seamus Heaney. Literature in the finest tradition has long been acknowledged as one of Ireland’s most precious gifts, but less well known is the extraordinary depth and beauty of Irish visual art.
The Irish: A Treasury of Art and Literature, is a lavishly illustrated overview of Irish culture. It reveals the breadth of the Irish experience through selected texts and images that mark momentous developments in art, religion, politics, and everyday life. The selections evoke the tone and texture of Irish life from the pagan legends, the flowering of Christianity, and the “golden age” of Ireland, to the terror of the early invasions, the brutality of the conflicts which clouded the sixteenth and seventeenth centuries, the massive emigration following the great famine of the nineteenth century, the Celtic Revival of the arts in the early twentieth century which drew much of its inspiration from the landscapes of the past, to the continuing struggles in Northern Ireland today. The carefully chosen texts of stories, plays, poetry, essays, letters, and political documents combine with images of ancient sites, precious objects (both religious and secular), illuminated manuscripts, paintings, drawings, and prints to convey the passion, eloquence, and diversity of Irish cultural history.
Storytelling provided escape from a harsh existence into the unseen world of the imagination and spirit. Ireland’s oral tradition achieved the highest levels of art, and the Irish storyteller has been revered from earliest times. The writers of the Celtic Revival inspired a renewed interest in Gaelic language and traditions, and introduced us to the world of magic, fairies, and “pisherogues” – visitors from another world. Included in this book are selections by W. B. Yeats and Lady Augusta Gregory J. M. Synge, Sean O’Casey, Douglas Hyde (the first president of Ireland) and others who translated and transcribed stories from the Gaelic and wrote new works based on the old legends and traditions. Also included are excerpts from myths and legends of pagan Celtic folklore and early Christian writers such as St. Patrick and St. Brendan. The works of Irish literary giants are featured in selections by Jonathan Swift, Oliver Goldsmith, and James Joyce, as well as works from the modern era by Patrick Kavanagh, Seamus Heaney, John Montague and others. A special section is devoted to the stories of the immigrant Irish in the United States.
The more than 200 illustrations provide an historical perspective of the many facets of Irish art, from the magnificent metalwork of ancient times, embodied in gold jewelry, book shrines, and religious artifacts such as the Ardagh Chalice; to the thriving contemporary crafts of silver, crystal, fabric, and stained glass. Paintings from many periods depict the mysterious island beauty that is the creative wellspring for Irish artists and writers.