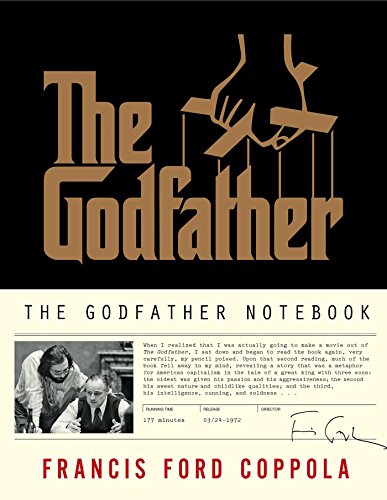 THE PUBLISHING SENSATION OF THE YEAR FOR EVERY FILM FAN

The never-before-published edition of Francis Ford Coppola’s notes and annotations on The Godfather novel by Mario Puzo reveals the story behind one of the world’s most iconic films.

The most important unpublished work on one of the greatest films of all time, The Godfather, written before filming, by the man who wrote and directed it—Francis Ford Coppola, then only thirty-two years old—reveals the intense creative process that went into making this seminal film. With his meticulous notes and impressions of Mario Puzo’s novel, the notebook was referred to by Coppola daily on set while he directed the movie. The Godfather Notebook pulls back the curtain on the legendary filmmaker and the film that launched his illustrious career. Complete with an introduction by Francis Ford Coppola and exclusive photographs from on and off the set, this is a unique, beautiful, and faithful reproduction of Coppola’s original notebook.

This publication will change the way the world views the iconic film—and the process of filmmaking at large. A must-have book of the season. Nothing like it has ever been published before.