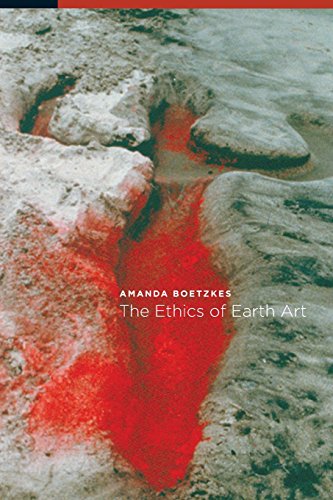 Since its inception in the 1960s, the earth art movement has sought to make visible the elusive presence of nature. Though most often associated with monumental land-based sculptures, earth art encompasses a wide range of media, from sculpture, body art performances, and installations to photographic interventions, public protest art, and community projects.
In The Ethics of Earth Art, Amanda Boetzkes analyzes the development of the earth art movement, arguing that such diverse artists as Robert Smithson, Ana Mendieta, James Turrell, Jackie Brookner, Olafur Eliasson, Basia Irland, and Ichi Ikeda are connected through their elucidation of the earth as a domain of ethical concern. Boetzkes contends that in basing their works’ relationship to the natural world on receptivity rather than representation, earth artists take an ethical stance that counters both the instrumental view that seeks to master nature and the Romantic view that posits a return to a mythical state of unencumbered continuity with nature. By incorporating receptive surfaces into their work—film footage of glaring sunlight, an aperture in a chamber that opens to the sky, or a porous armature on which vegetation grows—earth artists articulate the dilemma of representation that nature presents.
Revealing the fundamental difference between the human world and the earth, Boetzkes shows that earth art mediates the sensations of nature while allowing nature itself to remain irreducible to human signification.