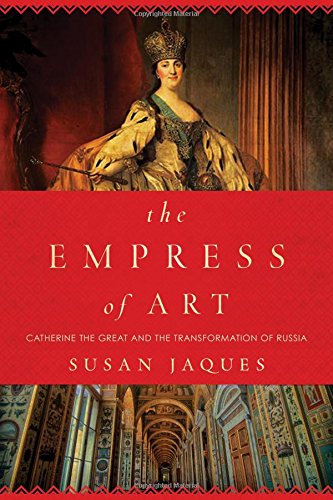 Ruthless and passionate, Catherine the Great is singularly responsible for amassing one of the most awe-inspiring collections of art in the world and turning St. Petersburg in to a world wonder.  The Empress of Art brings to life the creation of this captivating woman’s greatest legacy

An art-oriented biography of the mighty Catherine the Great, who rose from seemingly innocuous beginnings to become one of the most powerful people in the world. A German princess who married a decadent and lazy Russian prince, Catherine mobilized support amongst the Russian nobles, playing off of her husband’s increasing corruption and abuse of power. She then staged a coup that ended with him being strangled with his own scarf in the halls of the palace, and she being crowned the Empress of Russia.

Intelligent and determined, Catherine modeled herself off of her grandfather in-law, Peter the Great, and sought to further modernize and westernize Russia. She believed that the best way to do this was through a ravenous acquisition of art, which Catherine often used as a form of diplomacy with other powers throughout Europe. She was a self-proclaimed “glutton for art” and she would be responsible for the creation of the Hermitage, one of the largest museums in the world, second only to the Louvre. Catherine also spearheaded the further expansion of St. Petersburg, and the magnificent architectural wonder the city became is largely her doing. There are few women in history more fascinating than Catherine the Great, and for the first time, Susan Jaques brings her to life through the prism of art.