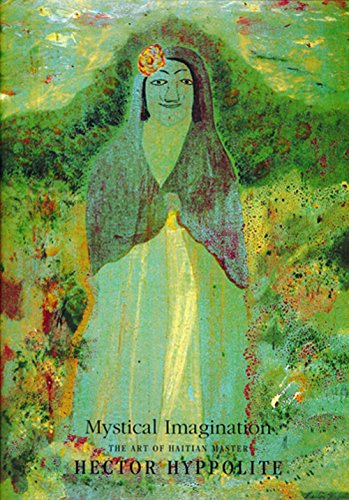 Hector Hyppolite was born in St Marc, Haiti, and at his death in 1948, was recognized as Haiti s foremost painter. By 1946, both André Breton and Wilfredo Lam were purchasing his work and hailing him as a master of naïve art.
UNESCO s 1947 exhibition in Paris gave Hyppolite world-wide reputation. Born into a family of voodoo priests, Hyppolite did not start to paint until late in his life. During World War I, Hyppolite traveled to New York, Cuba, Dahomey and Ethiopia before returning to the city of St. Mark in 1920.
Although by trade a shoemaker, house painter, and sometimes voodoo priest, Hyppolite painted postcards for American marines visiting Haiti. His painted architectural decorations in St. Mark brought him to the attention of DeWitt Peters, founder and Director of the Centre D Art. With DeWitt s encouragement, Hyppolite moved to Port-au-Prince and devoted himself to painting.
Using chicken feathers and his fingers as well as brushes, Hyppolite produced a body of work of remarkable richness and complexity. His works are collected and exhibited in major museums throughout the world.
In 2008 the Government of Haiti issued a decree establishing June 2008- June 2009 as the year of Hector Hyppolite as a testimony to the impact he has had on the art world. The Hector Hyppolite Retrospective Catalogue is an exhaustive source of the mystical work of that iconic Haitian artist. It is a further effort to project Haitian pictural production on the cultural map of the world.