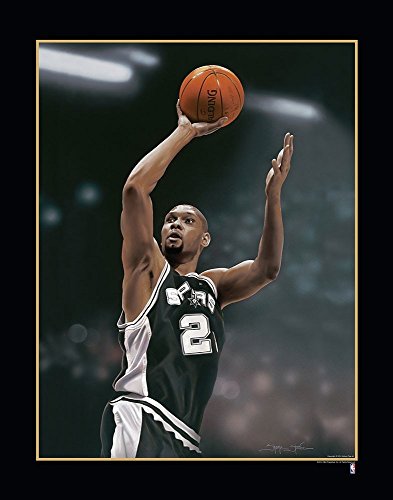 Victory Fine Art provides the finest quality sports paintings for fans and collectors. This print on paper features Tim Duncan of the NBA San Antonio Spurs. Tim Duncan the San Antonio Spurs power forward/center is a five- time NBA champion, two time NBA MVP, three-time NBA Finals MVP, and NBA Rookie of the Year. He is also a 15-time NBA All-Star and the only player ever to be selected to both the All-NBA and All-Defensive Teams in every one of his first 13 seasons. Duncan was also named by the Association for Professional Basketball Research as one of the “100 Greatest Professional Basketball Players of the 20th Century.” The youngest player ever on that list. With a double-double career average in points and rebounds, Duncan is considered one of the most consistent players in the NBA. Duncan also ranks consistently as one of the top scorers, rebounders and shot blockers in the league. Award winning sports artist Shane Stover painted Anthony on canvas with acrylic paint. Showcasing Anthony’s various athletic skills in a dramatic triple image composition. Victory Fine Art spent over a full year scrutinizing the renderings of 317 artists to select the four award-winning artists who create original sports artwork exclusively. In each painting these artists strive to capture the pulse of the moment and the athlete’s passion for the sport. Each piece of art is anatomically correct and has the proper composition, form and balance. Victory Fine Art is officially licensed by National Football League, Major League Baseball, the National Hockey League, the National Basketball Association and Mohammed Ali Enterprises (ABG Worldwide). In short, the philosophy of Victory Fine Art is to recognize the need of each collector to fall in love with the artwork and to feel the significance of the artist and the importance of the image selected.