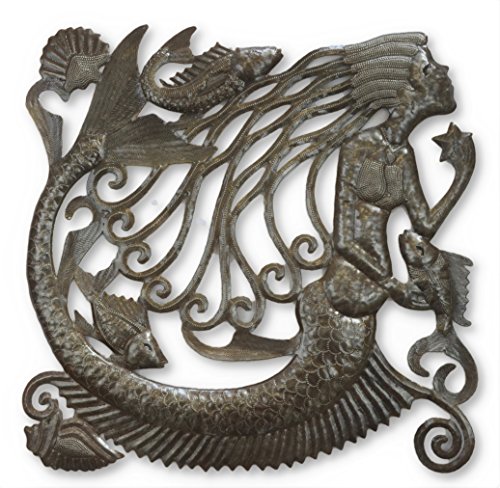 In fact, somehow in the face, they appeared more as men.” Captain John Smith’s experience in 1614 was evidently more pleasant, as he described, “a fish-tailed mermaid with round eyes, a finely-shaped nose, well-formed ears and long green hair.” What he thought of her naked breasts was curiously avoided his historical account!Maintaining the glossy appearance of this metal sculpture is a breeze. If displayed outdoors, apply a clear, spray-on enamel coating once a year. That’s it!A few nails and a hammer are all you’ll need to hang your sculpture. Look for a place where the design is joined or notched and put the first nail there. Use a second and possibly a third nail, if the piece is large, in other joined or notched design elements within the sculpture to straighten and secure it to the wall. Make sure that you avoid placing a nail into an eye or mouth, as that will draw attention to the nail. You want the nails to “disappear” into the piece.Following four generations of tradition, each piece of Haitian metal art is made entirely by hand with simple tools. Starting with a cast-off steel drum, the metal is cleaned, sanded, and pounded flat. From there, the artist chalks his design onto the metal and then begins the heavy, tedious work of cutting out the pattern with a hammer and chisel and giving the piece detail and dimension. Finally, he applies a clear-coat to the piece, which protects it and makes it perfectly suited for indoor or outdoor display.Each piece is signed by the artist Bernard Excellent.