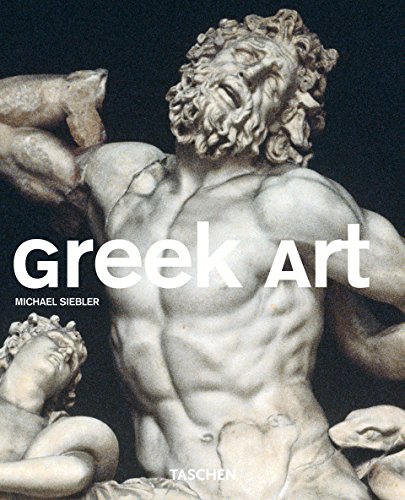 The birth of the occidental concept of man
The 18th century`s Neoclassicist movement, with its white marble sculptures inspired by the art of the ancient world, has helped Greek art to remain vivid in our memories even today. But the reality of ancient art was entirely different, as surfaces were in fact much more brut. As author Michael Siebler points out, recent findings have revealed that the seemingly perfect bodies of statues and sculptures were very often painted in flamboyant colors and ornaments. Thus ancient Greek art combined a high level of classical identity with an equal amount of sensuality. Despite being viewed in a new light, the beauty of the works of art persists.

Including detailed analyses of the following works: Alexander-sarcophagus; Lysippos: Apoxyomenos; Exekias: Amphora; Myron: Diskobol; Apoll from Belvedere; Laocoon; Nike from Samothrake; the altar from Pergamon, now in Berlin; the Alexander-mosaic in Naples; Harmodios and Aristogeiton, in Naples; Polyklet: Doryphoros; sculptures from the Alphaia-temple, now in Munich; Andokides: Amphora; Ptolemaier-Cameo in Vienna; Praxiteles: Hermes; Apollo from the Zeus-temple in Olympia; numerous sculptures in Athens; Euphronios: Krater, now in New York; some Elgin Marbles in London; the warrior from Riace, now in Reggio.

About the Series:
Each book in TASCHEN’s Basic Genre Series features: