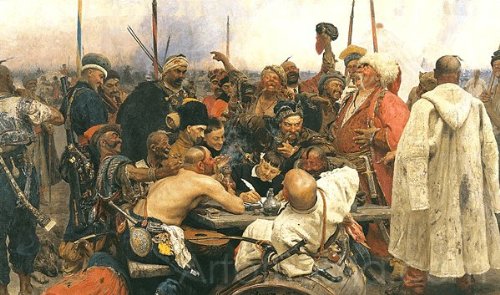 Reply of the Zaporozhian Cossacks to Sultan Mehmed IV of the Ottoman Empire.

One of Repin’s most complex paintings, Reply of the Zaporozhian Cossacks to Sultan Mehmed IV of the Ottoman Empire occupied him for more than a decade. He conceived this painting as a study in laughter, but also believed that it involved the ideals of liberty, equality, and fraternity[citation needed]; in short, Cossack republicanism, in this particular case, Ukrainian Cossack republicanism. Begun in the late 1870s, it was only completed in 1891, and was immediately purchased by the Tsar for 35,000 roubles, an enormous amount at the time.