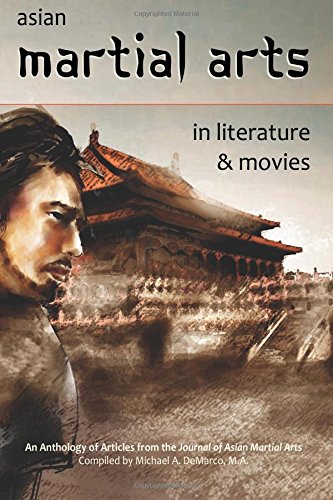 Most learn about martial arts through movies and print publications, primarily fictional. “Fiction is drama, the blood of drama is conflict, and martial arts are rooted in conflict,” writes James Grady in chapter one. Good fiction uses martial arts well, while poor writing skills can be plain boring! This anthology is a collection of fifteen articles that cover the richness and depth of Asian martial arts in both movies and literature. After look over the array of topics, I decided to utilize writings by James Grady for the two introductory chapters. Grady is an internationally renowned writer and investigative journalist known for his nail-biting thriller novels. His early novel was adapted to film as Three days of the Condor (1975) starring Robert Redford. Grady has since written over a dozen wonderful novels and in between wrote two excellent pieces for the Journal of Asian Martial Arts: one dealing with movies and another with literature. The following chapters are greatly enriched by the informative contents in Grady’s chapters. Details about movie-making are provided in the interview with producer Andre Morgan (Enter the Dragon, Walter Texas Ranger, Martial Law, etc.), plus the inside scoop in the publishing and film industries in the interview with multifaceted Curtis Wong. Actor/producer/kickboxing champion Don Wilson provides insights from both sides of the camera in his interview. Among the chapters are Albert Dalia’s exposition of China’s “wandering martial hero” stories that have roots reaching back two thousand years; Christopher Bates’ excerpt from Xiang Kairan’s Tales of Chivalrous and Altruistic Heroes; and Olivia Mok’s research and translations of sections of Fox Volant of the Snowy Mountain, a Louis Cha’s novel of 1959. In the latter, Mok extricates references to dianxue—the methods of attacking vital points. We also have fiction focusing on Japanese and Chinese martial traditions by John Donohue, Peter Graebner, John DeRose, and John Gilbey’s (aka, Robert W. Smith)—each highlighting combative experience, theory and technique with cultural trimmings. Interviews with Barry Eisler and Author Rosenfeld give insight into scholar/practitioners whose published novels contain text colored by their knowledge of the martial arts and culture. We hope you’ll find this book captivating, exciting, heroic, spellbinding, content rich, fascinating, penetrating . . .