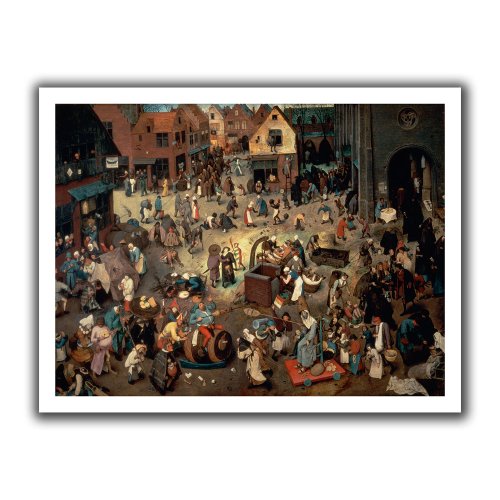 Pieter Bruegel ‘Fight between Carnival and Lent’ unwrapped canvas is a brilliant piece which portrays the contrast between two sides of contemporary life, as can be seen by the appearance of the inn on the left side – for enjoyment and the church on the right side – for religious observance. Bruegel’s artistic expression combined with significant interpretation is exemplified here. Pieter the Elder Bruegel was a Netherlandish Renaissance painter and printmaker known for his landscapes and peasant scenes. He is nicknamed ‘Peasant Bruegel’ to distinguish him from other members of the Brueghel dynasty, but is also the one generally meant when the context does not make clear which “Bruegel” is being referred to. From 1559 he dropped the ‘h’ from his name and started signing his paintings as Bruegel. There are records that he was born in Breda, Netherlands. He was an apprentice of Pieter Coecke van Aelst, whose daughter Mayken he later married. He spent some time in France and Italy and then went to Antwerp, where in 1551 he was accepted as a master in the painter’s guild. He traveled to Italy soon after and then returned to Antwerp before settling in Brussels permanently 10 years later.